The Spock Method for Controlling Emotional Involvement in Sales

I recently got an updated sales assessment test. And even though I had gone through this process earlier in my career, had gone through intensive 1-1 executive sales coaching, I wasn't surprised to learn that I was still struggling with Emotional Involvement. I knew there was something, but wasn't sure what it was.

What are some of the Emotional Involvement Indicators in Sales?

"When this occurs you'll become emotionally involved, a process that takes place whenever you think, analyze, strategize, worry, become creative or get excited. Rather than listening to your prospect you actually hear your own voice, causing you to lose objectivity and then control of the call. The right moves just don't seem to come to you and you end up fighting for survival. Since this is a major weakness you must learn to control your thoughts and emotions. Identify the situations to which you become vulnerable and practice them endlessly through role plays until you can literally handle them in your sleep."

I would reflect on sales conversations that went okay, but my gut was telling me could have gone better. Even though I could recognize it later, wasn't able to do so quickly enough to control it before it affected my outcome. 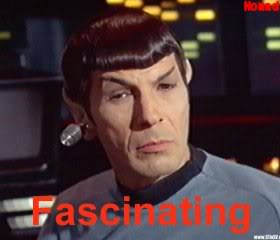 Plus, I want to be able to help others who have what it takes to succeed in business and sales, and for that- I need to be at my best. It nagged at me, until I got my test results. There it was, identified. Now what to do about it?

Have you ever practiced at something; piano, yoga, running, dance- and been frustrated when you see yourself making that same little mistake, even see it coming- but aren't able to make it disappear or stop it? Have you tried imitating someone you know? What 'tricks' or 'switches' have you personally developed to help yourself?

Here is how I found my switch- by channeling one of my favorite movie characters; Spock.

What mental process do you go through to help you get into the right frame of mind to think clearly and act with purpose? Do you have someone who you can trust to not let their own emotional involvement cloud their judgement when they advise you? If you do, I would love to read your comment on this. If you don't, maybe we should talk?