The 'Questions and Periods' Game for Sales Coaching

When I worked with my own personal coach years ago, I expected things to change in my professional life. But I didn't expect it in my personal life as well.

It started with a small change in the way I interacted with my hubby.

At the end of most days, he would come home, greet the dog, grab a couple beers, and trek down the stairs to my home office, Unless I was on the phone, he would announce that it was 'break time'.

We would then share stories about our days, talk about the things that ticked us off or made us laugh. He would tell me about issues at work, and I would say things like, "You should do this." He'd get annoyed with me, tell me I had no idea what it was like there and what this guy was like, and that would never work.

During a coaching session, my sales coach told our group call that successful sales took practice at asking questions. Someone asked, "But what if you don't have any leads yet?" Aren't leads people? Do you live under a rock? Practice on the people around you!

Poor hubby... When I started asking him questions like, "Have you tried this?" or "What if you said that, how do you think they would react?" he would say, "Hmmm, I hadn't thought of that."

So I practiced asking questions on hubby after work everyday. For the first few days, he didn't notice. The day he did, he turned it right around on me by mocking me. "Hey, can you do this for me?" I asked. His reply? Do you want me to do that for you? Damn it! He saw me. I had to get even better at asking my questions. It took paying attention to details, tone of voice, and timing.

A lot of focus goes into it! It's like improv. "All of life is a stage, and we are merely the actors in a play." 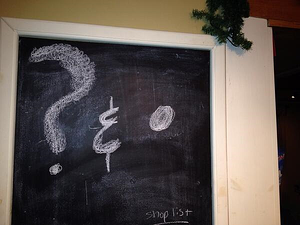 For a few years now, he (and now the kids) do this to me. They take on the cool calm voice of a therapist and we try to match question with a question, no periods at the end. It has become a game that we play, and the youngest is getting pretty good at it.

We even turned it into a drinking game at our New Year's Eve party. If you answer with a period, you have to take a shot. I won a lot.

But I then I realized something...

Winning is fun. Always winning isn't as much fun. There is no challenge in it, no competition. If I knew I was always going to win, what's the point in playing?

Then I realized something even bigger as hubby and I drove home from watching "American Hustle".  As he was talking about his day, I played questions and periods with him and he didn't know I was. "Why do you think so & so does that? What if you asked your boss this...?" Eventually I told him, and he asked, "Do you do this with everyone? Doesn't it drive them crazy?" I admitted that I do it with everyone, it has started to become how I think- I can't help it. "Do they know you are doing it?" Not usually, not if I don't slip up and show my hand...

He asked me why asking it as a question is so important (he won that round, because I had to answer that question with a period).

Why is asking questions so important in sales?

My secret to asking questions.

First, whenever I think I know the answer to something, I try to keep it to myself. It's like sitting on my hands sometimes!
Instead I visualize the answer as if it were on a map, and there are a few ways I could go to get there, but I won't know which way is the right way, or if my assumption is even correct that that is where we need to get to. Not until I ask questions to verify. Once verified, which direction will help lead my counterpart to see if they can get to the same answer themselves? Sometimes they do, sometimes we end up with a slightly different and possibly better answer (or destination). Sometimes neither of us are anywhere on the same map or want to get to the same destination, and I have to walk away.


The secret to asking those types of questions is simple. Your choices are:

Want to play a round of Questions and Periods? What will you get if I win?
Do you play with your friends, family, co-workers? Tell me your best, or worst round in the comments below. What secrets do you have for asking your questions?
And remember, if you aren't having fun- you are doing it wrong...
If you want to start asking better questions, check out the layered questions sales process to map out the questions you need to ask your ideal buyer.