You Can Break Free From Procrastination! 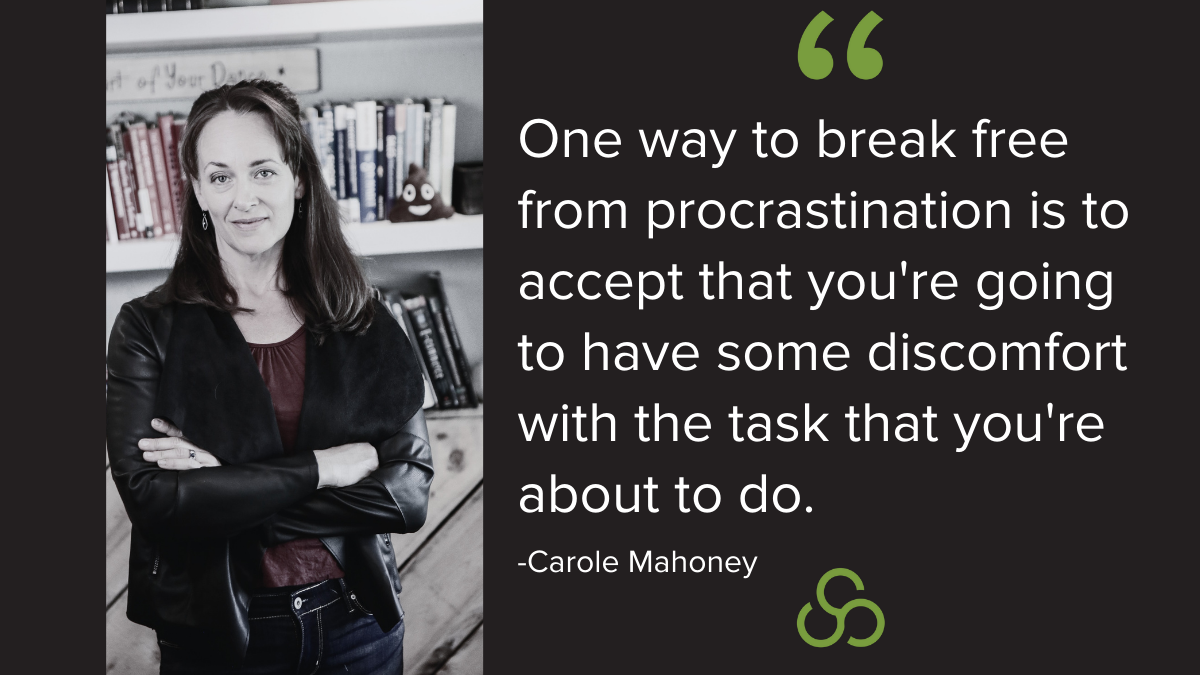 There are very few people in the world who don't have “Call Reluctance”. I mean who really likes to get hung up on?

I've coached and worked with BDRs and SDRs who have been called every explicit  word, hung up on and been called a horrible person. None of us want to do that interrupting and upsetting people.

And so we procrastinate the things that we just don't look forward to and don't want to do. That's just human nature.

One of the first ways to break free from procrastination is to accept the fact that you're probably going to have some uncomfortableness involved in the task that you're about to do.

We try to avoid it. And so we procrastinate - thinking, “Meh, we can put it off till later.

There's an interesting book that I've been reading lately called “How to Change", that was written by Katy Milkman who's a Wharton professor. And she shares that one of the reasons that we procrastinate is due to what's called a “Present Bias”. What that means is that we often procrastinate the tasks that are going to get us to our long-term goals.

Because we're so focused on the here and now.

And in the here & now, do I really feel like picking up the phone? I'll just send him an email. Because we don't account for that temptation, we fall prey to it.

But if we disrupt the cycle & create restraints or commitment devices to those things:

Now, there are a lot of different ways to create what psychologists and behavioral scientists call, “commitment devices”.

The most popular one — You've probably heard of is the strategy called the “carrot and the stick”, the reward or the punishment.

Now you could tie, for example - calls that reps make to their personal goals and encourage them to focus on their reward for reaching their goals.

You could coach them through where their reluctance is coming from. What's the worst thing that you think could happen? Is it really the end of the world? You can practice and roleplay those calls with them. So they're more comfortable and confident making them and knowing what they might be getting themselves into.

So you can use a commitment device and then give them some tactics and strategies and practice and role-play to actually execute on that. So that they're not just anticipating the uncomfortableness. They're finding ways to work through it. That's an example of using the carrot.

Another way you could also do, this is using the stick.

One creative idea that I had one manager do was that the team would set a deadline for, I'm going to make so many calls by this time. And if I don't, then I'm going to donate this much money to a campaign or charity that I do NOT support. So for example, if you're anti-gun, you would have to donate to the NRA.

That was an example of a stick.

Now another way that I've seen some people do this with the carrot and the stick is that rather than procrastinating, is to break that commitment down into smaller pieces.

So rather than for example, getting them to commit to 50 calls a day, have them start with 10 in the morning and then work them through the rest of that.

By creating these types of strategies, commitment devices, and support systems to help us get through it, we're anticipating that it's going to happen. And we're working through it rather than sticking our proverbial heads in the sand and pretending it's not going to happen.

Now, another reason why we procrastinate and that you can help your sellers to get over is well, we all think that we have this unlimited willpower. Like we're going to just suddenly like tear through 100 calls in a day. We're going to get all caught up because we overestimate the lug amount of willpower we have, which is a limited resource.

So by breaking it down into smaller chunks and pieces, it makes it easier for them to get started. They're not overwhelmed by it. And if they can do something consistently, then it becomes a habit. When you get something consistently done rather than doing it all intensely at once, if you've ever read James Clear’s book, “Atomic Habits”, then you'll know that making it a habit is almost like a set it and forget it.

Hopefully, that'll get your team to get through it.

So, if you found this helpful and interesting, definitely share it with everybody you know. But you also will want to subscribe to the monthly newsletter. This is where I go in even more in-depth into, what are the patterns, and trends that I see happening in the sales conversations that are happening at every level of the organization.