How the Data Proved Me Wrong About Sales Managers

Last week I presented brand new data on sales managers and their impact on their salespeople. If you were one of the sales managers and executives with growing teams that were there- thank you for your questions, the conversations in the hallways after, and the multitude of messages saying it was one of the best sessions all week.

For those of you who missed out, this post is for you.

They Didn’t Teach This in College

When you were a kid and someone asked you what you wanted to be when you grew up, did you proudly exclaim; “I want to be a salesperson!” If you are nodding your head yes, you are in the minority. I talk to hundreds of sales professionals a year and in nearly a decade, only 2 have ever said yes. We all fell into sales somehow, and until recently- it wasn’t something they taught in college.

Which leaves the responsibility to teach salespeople and managers on their companies.

A few years ago, I led a future sales leader roundtable. The topic they voted as the most important was less about them, and more about the others on their team. They wanted to know things like:

“How can I become a better manager and grow my people?”

How do I get them to solve their own problems and think for themselves rather than looking to me as the answer machine?

How do I get them to understand why they need to do something?

Yet in the very next breath, I heard these same sales managers and leaders talk about the lack of feedback and coaching they got even as they took on more responsibility and how futile it all felt.

This is not limited to my experience with sales managers. A study from the Association for Talent Development found that only 1 in 10 companies train their sales managers. 22% don't train them at all!

As a result, many new sales managers, who go from top rep to manager, believe that;

“If I was successful, then all I have to do is show them what to do and they will do it!”

Psychologists call this the Dunning-Kruger effect. It not only causes salespeople to overestimate their abilities, it also leads sales managers to believe that tasks that are easy for them are easy for others.

Sales leaders, if you want more from your sales teams, the solution is not to just develop the sellers, but to develop the sales managers. Stop assuming they know what they need to do- they don’t. Remember, they didn’t teach this in college until very recently.

How I Proved Myself Wrong

Based on that, I hypothesized that top sales managers were spending far more time in coaching, motivating, and keeping their team accountable. I was so sure of it, I based my entire presentation for #inbound18 on it.

But when I got the data (below) from my partners at Objective Management Group, I was more than a little surprised. 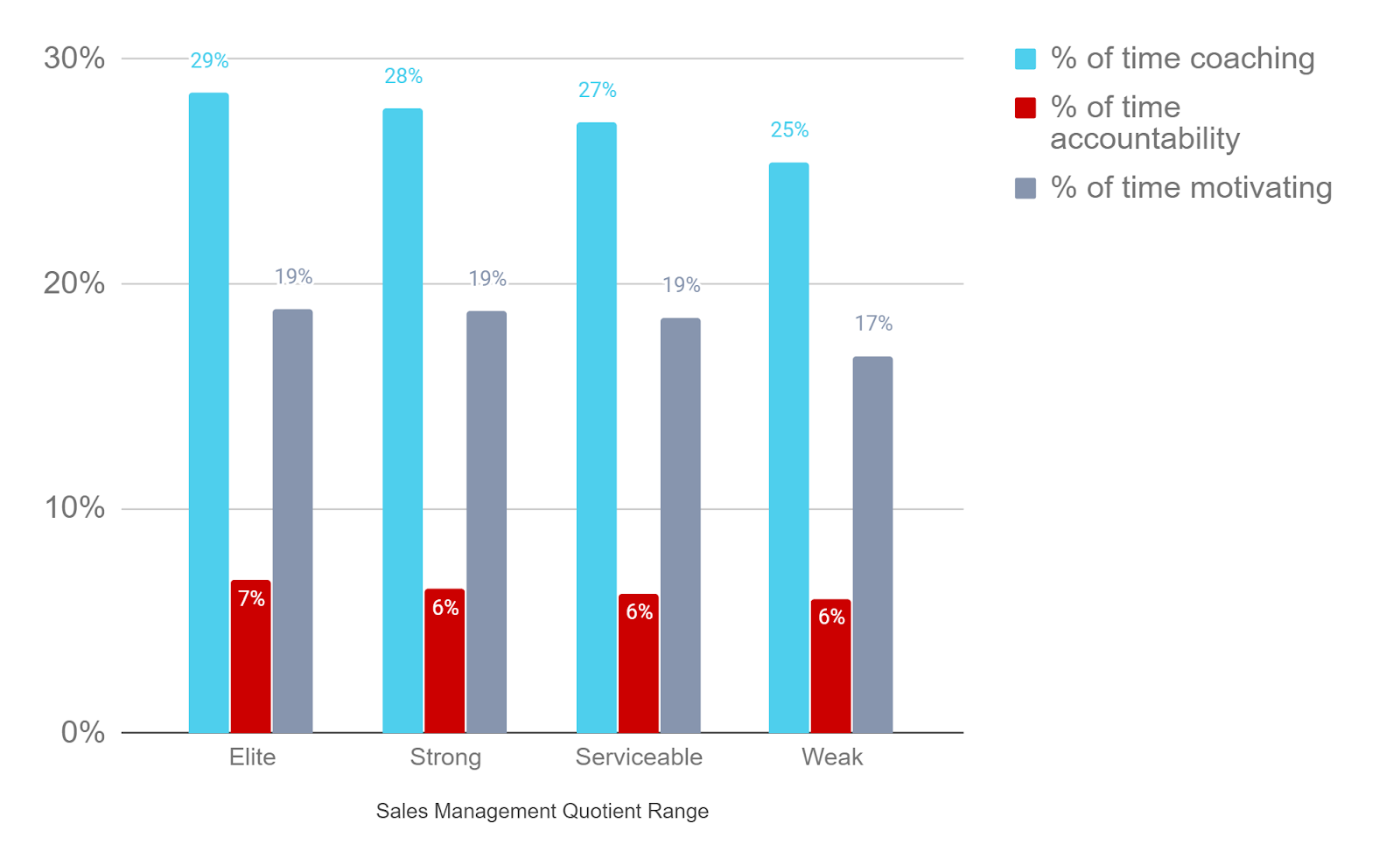 Do you see any difference in time spent? How is it possible that the most elite and the weakest sales managers were spending nearly the same amount of time in these three areas?

After my momentary pause to panic, I wondered how it was possible. It became a puzzle I had to solve, but without the benefit of a picture to see what the pieces should look like. And so once again, I turned to the data so I could answer questions like;

Here’s what I found.

The impact of coaching shouldn't even be up for debate anymore. The ROI has been well researched and documented.

Managers are spending an average of 27% of their time in coaching. But as the data shows, the impact of coaching time doesn't peak until 40-49% of the time. Which means this is still an untapped opportunity. 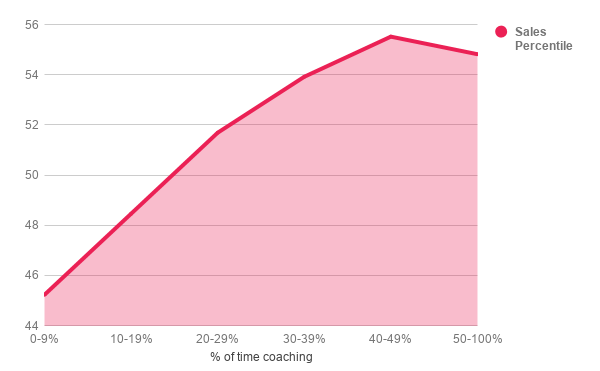 So what? This shows there is a direct correlation between the time spent and the skill level of the sales manager in coaching to impact the abilities of the salespeople. Infact , managers who were strong coaches AND spent at least 40-50% of their time coaching their salespeople had salespeople who had 49% more skills.

Now, if you consider that a 10% improvement in abilities leads to up to 33% more in revenue- that is a bottom line game changer.

If you are a manager who isn't spending 40-50% of your time coaching your team, you are selling them short by half.

If you are a sales leader who is not training and coaching your managers on how to coach, no matter how much time they spend there, they won't see the same gains. Everyone needs a coach.

But even a superhero sales coach will have limited impact on their team if they are not coachable, personally motivated to improve, and are willing to be held accountable.

To get a sneak peak at what the data had to say about motivating and keeping your team accountable, check out my slides from #inbound18 on slideshare here.

Stay tuned as I dive further into what over 360 million data points say about the impact managers have on their team in the coming weeks.

Click here to compare your team to nearly 2 million sales professionals and those in your industry to get a high level view of where you need to focus your coaching and training.