How true is the saying 'As goes the manager, so goes the team'?

Last year a sales manager asked for sales coaching because he “...didn’t want his shortcomings to become the collateral damage to his team.” After going through a 3-6 month program to ‘coach the coach’ and the team at the same time, his SaaS sales team is now #1 in their company, with a 98% customer retention rate.

Many of us have heard the phrase, “As goes the leader, so goes the team,” and much has been written about empathy in leadership (put yourself in their shoes), servant leadership (put others first), and ethical leadership (do what is right). And there are studies that show that these things help team members be more creative and more efficient when doing their jobs. 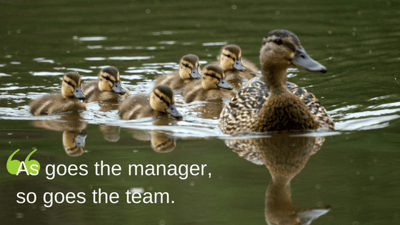 But back to the sales manager who was concerned that his team would suffer because of his shortcomings, both known and unknown. This manager had many strengths, including a servant mindset, empathy, and high ethical standards. So why were his strengths not enough to elevate and lead his team?

The answer is a double edged sword, as this manager well knew. Not only was he likely to pass on his own bad habits, he also wouldn’t be able to help his team to find a way to fix theirs.

What the data says about the impact of sales leadership

First, it is important to remember that the management role requires different skill sets than the salesperson’s role. Therefore you can not always correlate the data as it relates to specific skills. So what are we really saying when we repeat the phrase, “As goes the leader, so goes the sales team”?

Where do skills come from? Learned and practiced behaviors. And where do those behaviors come from? Our beliefs, attitudes, and mindsets towards those behaviors. So when we talk about sales management impacting the team, it’s not just what they do- but how they think. Changing how we think is difficult, but far from impossible.

But which mindsets have the greatest impact?

For that answer, I analyzed the most comprehensive sales data from OMG that has compiled data from over 2 million sales professionals measured on 282 sales specific attributes (I will let you do that math on how many data points that is). What the data showed revealed some interesting things worth considering. Some that were downright surprising to me!

The beliefs of your manager and team will either support, or sabotage, their outcomes. According to The Theory of Reasoned Action, the decision to perform a particular behavior is determined by our attitude towards doing it, what other close to us would consider normal, and if it will lead to a positive outcome.

Some examples of common non-supportive beliefs:

Clearly, supportive beliefs are where managers can have the biggest impact on their team.

The impact in which skills that have a need for approval have on your sales team’s ability to execute include:

When salespeople aren’t able to do these things, they aren’t pushing back on prospects when appropriate, or challenging the status quo. If you want your team to sell consultatively on value and not price, then this is one area you can’t afford to overlook.

Managers with a need for approval are passing it along to their team with alarming results.

Symptoms of a lack of emotional control in your sales team may include:

Salespeople who are able to control their emotions are better able to listen and ask questions. This strength enables a salesperson to offer insights to prospects that makes them think differently about themselves and their problem. This is a cornerstone of good selling!

A buy cycle means that how salespeople buy impacts whether or not they will be empathetic to procrastinators, price shoppers, and comparison shoppers. Because they struggle with buying, it is impossible for them to help their buyers make one.

Symptoms that indicate that your sales team struggles with a non-supportive buy cycle may include:

Unfortunately, 63% of sales managers struggle with making buying decisions, and 75% of salespeople do. If a manager has a supportive buy cycle, their team is 17% more likely to share that strength.

But if a manager does NOT have a supportive buy cycle, their team is 6% more likely to share that weakness.

The ability to have in-depth financial conversations with buyers depends on how comfortable your team is discussing money.

Symptoms of NOT being comfortable discussion money can include:

For managers who are NOT comfortable discussing money, their team is 31% more likely not to be comfortable either.

So if the sales manager’s mindsets, attitudes and beliefs clearly impact the team- how is your leadership impacting them? What beliefs are you passing onto them? What elements of your culture need to change? What systems and processes need to support that? Do your development programs include training and coaching for managers so they are not the collateral damage to their team?

How might your managers be impacting your sales team? To discover how to start changing these attitudes and mindsets, click here discuss some of the symptoms your team has.

To learn more, download the “Mindset Matters” eGuide for a more detailed explanation and actionable tips you can start implementing right away.