Should you take notes during sales meetings? 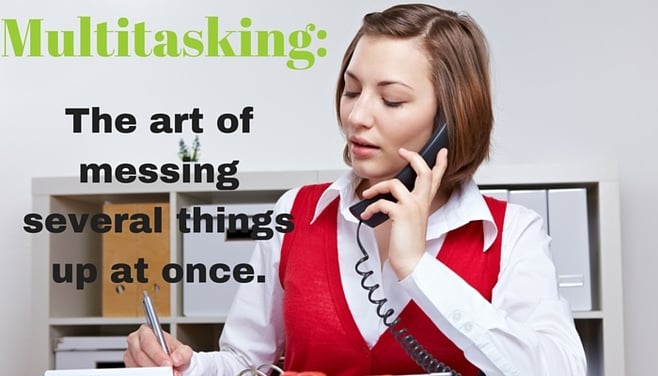 I used to think that no one was better at multitasking than I was. At one point in my life, I was a single mom, full time student, landlord, and worked full time on the ground floor of a really cool tech start up. Multitasking was my life. My mom used to ask me when I was going to stop burning the candle at both ends. To which I replied, "I'm not just burning it at both ends, I'm breaking it in half and burning both of those ends at the same time."

I was proud of my ability to juggle. What I didn't know was how bad I was actually performing. Multitasking was making me stupid and stressed. Assignments took longer, mistakes were made, I was always late, and because I was stressed out and miserable, so was everyone around me.

Later, when I started my own business and then my own journey to the 'dark side' of sales- I was still holding on to my multitasking ways. I took pages of notes on calls because I didn't want to forget anything.

Recently the question was posed in a group on LinkedIn, "How do you take notes during a sales call?" With nearly 30 people commenting on their how, everyone seemed to be making the same mistakes I did.

Why is note taking during a sales call a bad idea?

Isn't it hard to be actively present and listening to people if you are busy taking notes, no matter how you are doing it? Studies show that multitasking actually reduces your IQ and ability to focus on what the other person is saying, never mind being able to pick up on nuisances like body language and their tone of voice. It's not just what is being said that's important, but how it is being said. If you are actively listening, you aren't doing anything else and you are more likely to remember what is important.

So how should you have productive calls? Here's what we coach to our clients: