Unconventional advice for sales people at the end of the month 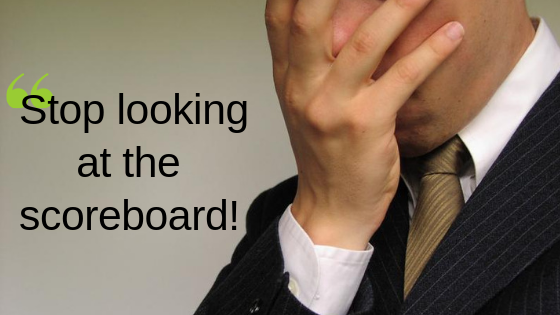 Are you like many of the sales people that I talk to who basically disappear at the end of the month because they're busy trying to close deals?

You've probably heard the saying that sales is a numbers game. But it's not.

I know, I know- it’s the end of the month and you aren’t going to hit your number. Right now to you, all you can probably think about is that number. And it’s messing with your head.

Sales is a head game.

Your numbers start in your head in your head based on what you believe, and the thoughts you entertain will determine the behaviors that you have, which turns the activities and outcomes and numbers that you'll get.

Stop looking at the scoreboard.

So my unconventional advice for salespeople at the end of the month is to stop looking at the scoreboard.

End of month it's prime time for sales people to be emotionally involved in what's going on or not going on in their deals. And that is the thing that will make you the most ineffective.

What you should be focusing on instead:

Focus instead on the process. Those who are successful in today’s environment have a growth mindset and grit- which means they focus on the process and the next step to move forward. I recommended books grit by Angela Duckworth and Mindset by Carol Dweck for every sales professional.

It’s why many of my clients tell me they wear my tee-shirt at the end of the month. When they remember its not about them or their number- it’s take the personal out of the rejection. It also puts your head where it needs to be- on the problems your buyers have.

And if you don’t get your head straight- you'll be less likely to want to prospect even though you know you really need to. And so you'll find all kinds of reasons that you can't make that a daily discipline. I don’t have the right CRM view set up, I don’t have any close connections to my prospect, calling them will never work...

And not only that, but then the calls that you do have will be ineffective because you're so wrapped up in what needs to happen in your own head. You're not in tune with what's going on in your buyers. And so you're missing questions, you're finding excuses not to push back when you should. As a result, deals are going to get delayed, or they're not going to happen at all.

So when you're at the end of the month, and the emotions are running high. The last thing that you want to do is look at the scoreboard. Instead focus on the process. The process of continually improving your sales skills, the process of taking one step at a time and finding at least one person a day that's new to talk to when you're paralyzed with the emotions.

These are just a few of the things I teach in my Sales Lab course. Check out our recaps from the Live Sales Labs!