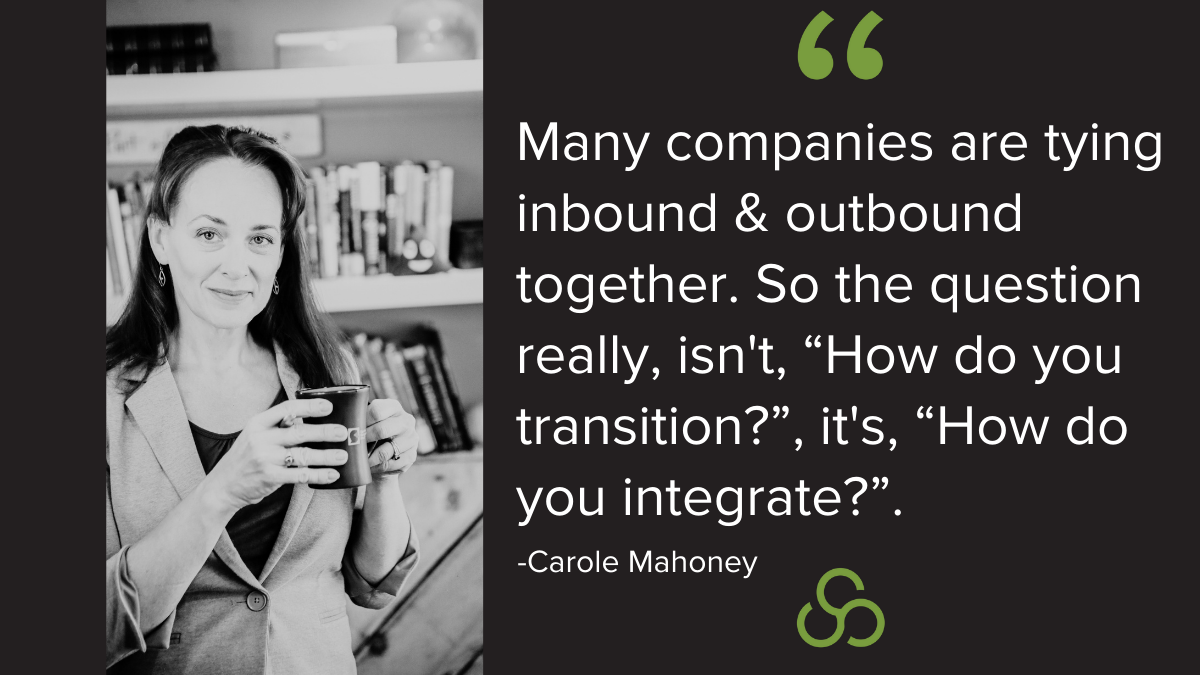 So it's interesting that many people talk about: “it's either, or”. As if life was black and white and that we make decisions based completely on one or the other.

The reality is that transitioning from inbound to outbound is not one or the other. It's an integration of the two.

There's actually some Gartner research that was done last year, where they looked at buying experiences and they found that B2B buyers who preferred a 100% digital experience:

Let's just say inbound, for example. Where they never have to talk to a salesperson, they had a 23% higher chance of buyer remorse or churn. But it also found that when a rep engaged with someone using both digital & in-person conversations, there was a 17% impact on the buyer consensus, decision-making process.

So what that means is that we apply this to inbound versus outbound.

How you combine the two together, that will create a buying experience, is what it’s going to make them both work better. So for example, some of the best companies…some of the companies, by the way, might I say, who invented the word inbound are doing exactly that. They're tying inbound and outbound together.

Let's say if someone goes to your website and downloads your latest white paper, you can then use that information to go outbound by maybe looking at:

You can reach out to the person who downloaded the white paper and ask very simple open-ended, non-threatening questions. Like:

That can give you a little bit of intel as to what might be happening in the organization with context. You could also see when a bunch of people from a company is downloading resources from your website.

Then reach out to their marketing managers and to the CMO and ask, “Hey, I've noticed that a lot of people on your team are downloading things about SEO or social media marketing. Did you ask them to look into that or is it something that they've started looking into based on some of the initiatives that are happening at your company?

That's one way that you can use that kind of inbound intel to go outbound.

You can also do it in the reverse.

You can use some of the outbound conversations that you're having with your inbound.

So if salespeople and BDRs are reaching out to people with a value proposition and they're just saying, “You know, we help many CMOS that are frustrated with all of the different systems that they have. And they're not able to talk to each other and it takes them forever to generate the reports to prove the ROI of their campaigns to leadership. Is that something that you find yourself frustrated with?”

And they reply, “No, actually, this is what I'm frustrated with right now”.

That's intel that you can then take to your inbound team and inform them of the need to be creating content around this because this is a trend that's changing.

So it's not one or the other. It's how you can combine the two together.

Either in your sequences as far as if you're using social media, cold calls, and email together in a way that aligns with the buyer's world and the problems that they're trying to solve? Not just product pitches…

Just a couple of examples of how you can integrate inbound and outbound together.

But you also will want to subscribe to the monthly newsletter, where I go in even more in-depth into what are the patterns and trends that I see happening in the sales conversations that are happening at every level of the organization.

So, sign up and You'll be the first to get in on these insights before anybody else!