The importance of practice & navigating the learning curve 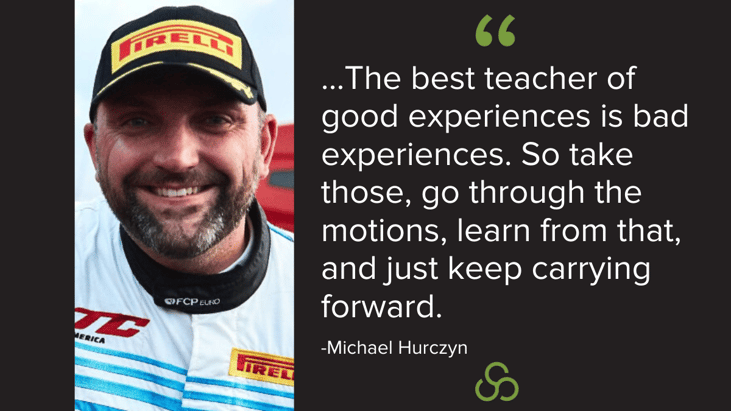 In regard to practicing and gaining experience, Race Car Driver, Michael Hurczyn, says, "...it's really important to be patient and understand that it is a process and you can't get experience overnight. You have to live through that and the best teacher of good experiences is bad experiences."

Continue below to learn more about the importance of practice and navigating the learning curve by surrounding yourself with great mentors.

The importance of practice and navigating the learning curve in racing

So you've been doing this for 20 years, but do you see maybe people who are coming into it that are new, that don't have as much experience as you do... Do you find that they practice or that they practice a lot more in order to get to that point where they're not overly excited, they can stay in that moment?

So yeah, there's a couple things. There's a great book, Grit. Have you read Grit by Angela Duckworth?

So there's a formula in there, which is talent plus effort equals skill and then skill plus effort equals accomplishment. And so somebody could be really talented whether it's driving or in talking to people in sales or whatever it may be, but they don't have a lot of effort. They don't have a lot of time put into it. So their skill level isn't as high as somebody that has been doing it for a lot longer.

And then you combine that skill with the amount of effort they're putting in, you can have a seasoned salesperson that's been doing this for 10 years, that is really good and kind of gone through. And then you have somebody that's there for a year, and the person that's there for a year might think they're as smart or as charming or whatever as the 10 year veteran, but they just don't have the experience. And so maybe their results aren't speaking for themselves the same way that the 10 year veteran has. And they might get frustrated by that.

But if you think back to where that formula is, it's just you don't have the same amount of effort because you just haven't put in the time yet.

So I would say that it's really important to be patient and understand that it is a process and you can't get experience overnight. You have to live through that and the best teacher of good experiences is bad experiences. So take those, go through the motions, learn from that and just keep carrying forward.

Yeah, and when you were early in your career in race cars and also in sales, because you've been in sales as well, what were some of the things that you found that were helpful for you to get through that learning curve?

As you know, we do coaching, but are there some other ways that either salespeople or newer professionals can start to scale themselves up in a way that they can compete?

I really think it's who you surround yourself with.

Because when I was young, I was probably faster or maybe a little bit more fearless 20 years ago than I am now. I understand consequences and how much all this costs more. And I would say the same would be in sales too. You come into this, you're full of piss and vinegar and you're trying to take on the world and you know everything and everyone else is stupid.

Now, you come to a point in your life where you realize that there are other people there that have been doing this longer, are smarter than you, and you can learn something from them. And I would say the sooner people pick up on that and surround themselves with good mentors and good colleagues, then the sooner they can learn from them and improve themselves.

Yeah, I think there's a saying that says something like, you rise the level of the five people that you spend the most amount of time with.

Don't miss the next installment!

Make sure to subscribe to this blog or our Youtube channel to be notified when the next post goes live. And don't forget to check out the events page to register for the next live session!