How do you know if you're cut out for this type of career? 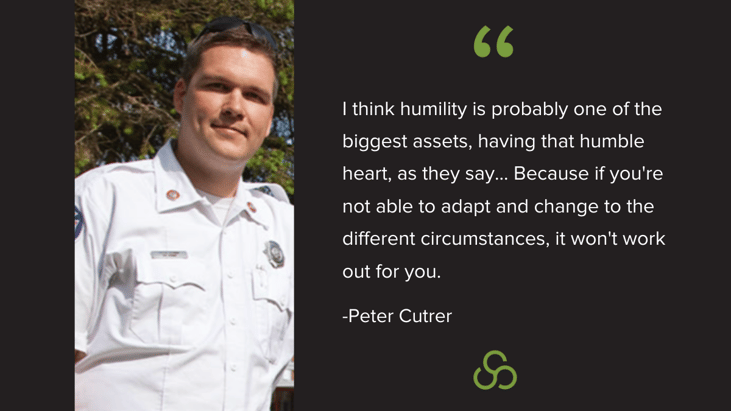 Choosing a career path isn't a simple task. When it comes to sales, one of the biggest fears that we face is facing rejection. But with fighting fires, firefighters run into burning buildings when everybody else is running out.

Check out this clip from the What Sales Can Learn From A Firefighter to see what Peter Cutrer has to say about determining how this career was something that he was cut out for as well as how he deals with the stress from the job.

Carole Mahoney: So, how do you know that you're cut out for something like this? Because it doesn't sound like it's an easy on-the-job kind of a training situation. Like salespeople every day face rejection and it's not something that we would naturally incline ourselves to do. You run into burning buildings when everybody else is running out. How did you know this was something you were cut out for?

Peter Cutrer: Well, again, we're going back to training. During the training process, the instructors replicate or role play, as you say, many evolution's of different scenarios so you understand pretty much what you're going to face in the field. Of course, there are unknowns at times.

But this training, by going through different scenarios on, like I said, cutting cars. I remember when I was in boot camp, they took us to a junkyard and they had us chop open all types of stuff. They had all types of training props like a burned building where you're cutting through the roof, you're doing search and rescue, you're repelling, you're doing all types of things.

So, during training, there is a lot of people that drop out. They don't make it, and I think that's kind of a defining moment, whether or not this job is going to work for you. The other thing with firefighting is oftentimes you're involved in a probationary period where you're trying to see if the job is going to work for you and the department is trying to see if you work for them.

Usually, the people that don't make it do not have humility. I think humility is probably one of the biggest assets, having that humble heart, as they say, and they use that term quite a bit in training. Because if you're not able to adapt and change to the different circumstances, it won't work out for you.

So, thankfully, I had some really good mentors, which I'm big on mentoring, and they helped me through the processes that I had challenges with. And then eventually everything did work out, and I have enjoyed a successful career in public safety.

Carole Mahoney: I love what you just said too about the humble heart because that is one thing that I find myself repeating to salespeople a lot, which is it's not about the latest tactic or the latest tool or the latest technology. It's about, do you have the kind of humility that you're always going to be learning, willing to adapt, and have a personal process to do so?

So, tell me a little bit about how you manage the emotions of the job because even in sales, it's a lot of times the things that happen in your head are going to impact your behaviors. You see a lot, you go through a lot. How do personally manage those things?

Peter Cutrer: That's a great question. Actually, stress and even PTSD is a big problem in the emergency services field. Unfortunately, a lot of firefighters don't deal with the stress correctly and they turn to substances and alcohol and things and it just creates a lot of problems.

I'm a father as well and I understand the grief that this person might be feeling. And you're always asking yourself, did you do everything you could? But at the end of it all, you followed your training, you followed what you learned and you did your best, and sometimes there isn't a good outcome.

And I'm sure in sales it's that way too because you're not always going to cash in on what you're looking for. But with the leftover emotions, there's a couple things that I've found over the years that have really helped. First off, one of my mentors used to always say, "We need to be Teflon. Nothing sticks."

So we can have a bad day, but we need to move on. We need to take that and not allow it to stay with us. The other thing that our mentor suggested is trying to find an outlet, something to do with your time when you're not feeling your best. So, for instance, what I did with my time was I started working on motorcycles, and I actually created a YouTube channel hashtag BackDraft Bikes if you're interested in checking out my channel.

But we do reviews on motorcycles and parts and things, and I found it to be a very enjoyable hobby. I've got some followers and stuff and it's fun and it's a good way to relieve the stress because everyone has to unplug at some point. You can't live your job at home because if you do, you're going to go crazy and you won't have a family life.

Carole Mahoney: Yeah. I think that's so important, for not only sales people, but sales leaders and managers to remember is that we are not dealing with machines. We're dealing with humans who need to have some way to relieve that stress and that outlet. And it's actually I think for sales leaders, and you've maybe even seen this in the fire department.

There's ways to have outlets that are even at team building exercises as you mentioned. That there's a real collaboration. There are a lot of people going through the same things. I have some other firefighter friends of mine that you know and their favorite thing to do is to go out into the wilderness, go rafting, do some kind of an extreme sport.

And they sit around the campfire and they talk about these things and they make each other laugh. It's an outlet for them. Whereas I listen to some of the stories that they tell and I'm horrified, but for them it's like this is their outlet.