The importance of being mentally prepared 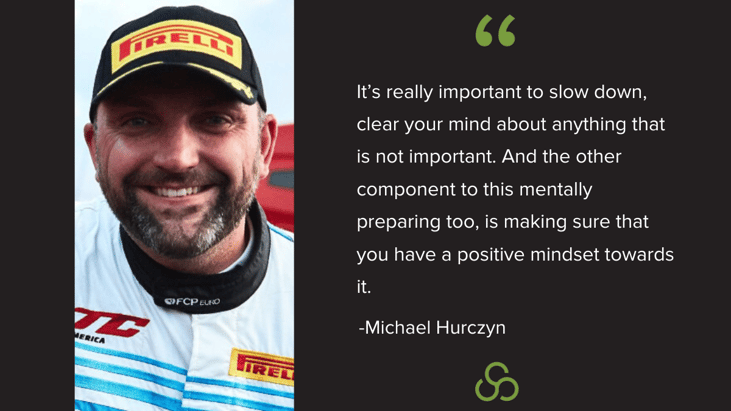 Being prepared is something that we discuss time and time again in sales. In racing, being prepared can mean life or death.

Check out this clip where Race Car Driver, Michael Hurczyn, explains his process to learn some tips that you may be able to use as well.

The importance of being mentally prepared before going into a race

You know that I'm a big fan of understanding what's going on between our ears and how that impacts us in the moments that we need to perform. And I find it interesting too that, you hear a lot of the studies that sales people are only spending 20 or 30% of their time actually selling. So we really need to make that time count because of all of this preparation. So when you're about to go into a race, why is it so important to be mentally prepared first, in your opinion?

So, I mean, there's a couple of reasons.

One, what we're doing is inherently dangerous. We obviously have all the safety gear and if you're not concentrating and you make a mistake, there's serious consequences that could be had.

Two, we're operating really expensive equipment that, besides how expensive the cars are, there's all the prep that goes into it, and the parts that go into it, and the people we have to pay to put that together. So, making sure that we're getting something out of our investment.

And then obviously, to do well. We have realized that you can finish second every single time, but you don't really get any press for doing that. So, finishing the race first, you get a lot more exposure, which is kind of the point of us doing all this.

So it's really important to slow down, clear your mind about anything that is not important. And the other component to this mentally preparing too, is making sure that you have a positive mindset towards it. Like one, I get the race cars, so there's really not much to complain about. Even when you're having a bad day or a bad session, if you step back, put yourself in a positive mindset, you're still at a racetrack, you're still racing a car, and trying to not have a toxic attitude or be cynical about what's going on. Because it's a really high stress environment, so sometimes people just get really upset and the car sucks, this didn't happen. But realistically that's not helping you be calm and be mentally prepared for the race.

Yeah. Kind of like salespeople when things don't go their way and they start blaming the product, or the price, or the market, and there's all of these reasons why.

So when you're going into a race, what are some of the techniques or tactics or things that you do to make sure that you're mentally prepared? Do you have a routine that you go through?

I have a couple of routines I go to. My team always makes fun of me because I pee a lot before, because you have to stay hydrated! And so it's like every 15 minutes you're running to a Porta Potty or to the bathroom. But outside of that, hydration and physical component is important too, because we're in a car, it's 115 plus degrees in there sometimes. You're wearing fireproof pajamas and a helmet and everything. Physically you have to be prepared. So what you eat, not drinking a lot of alcohol, making sure that you're hydrated are all very important aspects of it.

But then for me, maybe up until about an hour before I have to get into a car, I need to stay busy. Cleaning stuff, wiping down the car, doing things to keep my brain occupied, because otherwise it starts to wander and then you get kind of anxious.

And then about an hour beforehand I try to clear my head, whether it's doing a little bit of meditation, like sitting in a room with my eyes closed and listening to music or something like that. Just to clear your head so you're not thinking about all of the possible scenarios. And then you're thinking, as it gets closer, you get in the car, we're doing laps in our head, how the perfect lap would be. And playing out scenarios of if somebody goes inside of you into turn one, how are you going to react, and doing things like that. And then as soon as you strap into the car, all of that goes away, your heart starts beating faster, and then it's go time and focus.

Yeah. So during the race itself, I think I shared with you earlier, the only book that I've ever read about racing is The Art of Racing in the Rain, which is a book about a family and a race car driver. He races Lamborghinis and he actually does race in the rain and then he has this spin-out, things happen. But one of the things that struck me about that was he said that there's this moment when you're racing, or maybe it's the whole time, where there's nobody else around you. It's just you in the car. And you're not even thinking about how to react. It's just you're so very present that it's almost like you can see things before they happen. Have you ever had that happen with your races?

Other people could call it "getting in the zone," or it's kind of like tunnel vision, but you're so focused on what's happening in front of you that you can't actually think about anything else. And I would say that if you're thinking about something other than what you're doing, you probably shouldn't be in the car because you're a danger to yourself and others around you.

So there's really just a focus. You kind of become one with the car. Things are happening almost subconsciously. And it's just muscle memory and repetition and experience. And so, I mean, I've been doing this a long time, for 20 years.

So getting into the car, for me, is almost second nature and I like to think that I'm a little bit calmer in the car than some of the newer drivers that get excited about scenarios. And there's a lot of people that make mistakes that could have been avoided, but mentally it's really hard because it's high stress, you're physically and emotionally drained, and things happen so quickly. And if you're not prepared to react to them, that's when accidents happen, or you you spin out, or you do whatever.