The importance of leading vs pushing 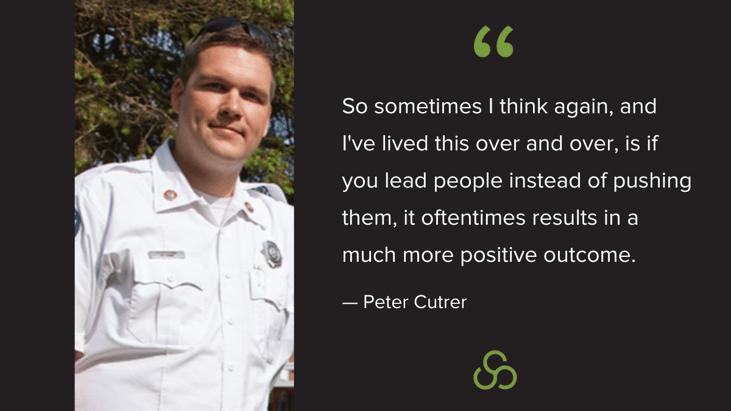 In the last clip from the What Sales Can Learn From A Firefighter Series, Peter Cutrer explains the importance of understanding the difference between leading and pushing, and how leading can help you get the results you're going for.

Check it out below!

The Difference Between Leading and Pushing

Peter Cutrer: You know, again, my job now, I do have a degree of sales built into it. And one of the things that I always talked about as well in public safety, when I retired, I was a deputy fire chief of a smaller city department. And I had 45 guys working for me. Guys and girls, I should say. I always told them to treat the customer the way they wanted to be treated. And one of the things ... you get puzzled looks on their faces. They'd say, "Customer?" And some of the guys would say, "You mean citizen?"

But if you think about it, the people are customers and they're taxpayers, they're supporting our department. They're our customer and we all want to provide good customer service. So when we're dealing with people, whether we're selling, we're fighting fires, we're helping people out on the worst day of their life. People don't like to be pushed into making a decision. They want to be led there.

For instance, I remember one call we went to, there was a small boat that had capsized in a river and there was a few teenagers and a mom and the people had taken in quite a bit of water. So we told them they needed to go to the hospital to get checked out because it can turn into something serious, but the people didn't like being told that they had to go to the hospital. So instead after we explained what could happen, they were actually in the ambulance starting the sirens and saying, "Let's go."

So sometimes I think again, and I've lived this over and over, is if you lead people instead of pushing them, it oftentimes results in a much more positive outcome. And it can't be more truer with sales. People don't want to be forced into a corner. They want to know what's in it for me, what can I benefit from this? And I incorporate that on my training's, mainly training fire marshals on how to get compliance and how to keep building safe ... don't force people to do it just because you're wearing a badge. Help them understand the reasons why they need to do it and then they'll comply without you even having to ask them.

Carole Mahoney: I love it. I didn't even prep you to say that, but it lines up perfectly with how I actually train and teach salespeople, as well, is that it goes back to the it's not about you or your product or what you want and when you start telling people what to do, it's usually based on because you want them to do something that's in your interest.

At least that's how they perceive and the thing is is that people can smell that a mile away and when you start telling them what to do, their natural reaction like a four year old is to resist. "Oh you don't want me to put my finger on that light socket. That's exactly what I'm going to do." Whereas like you said, people want to be able to make decisions, but they want to be able to feel comfortable and confident and knowing why they're making those decisions. And anytime you try to force them or trick them or manipulate them or use one of your sales-y tactics to do so, that's where you're going to meet with resistance.

Want to see more of these tips?