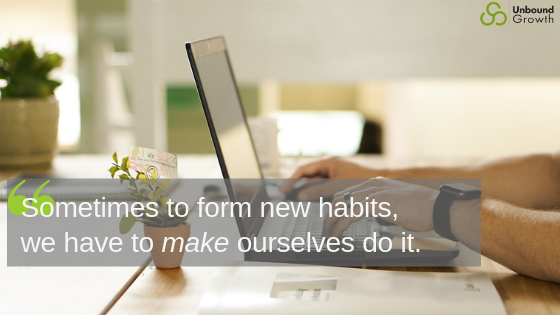 How do you make prospecting a habit?

How do you make it something that helps avoid the situation where you find yourself at the end of the month, end of the quarter, or end of the first half of the year wondering why your pipeline is so skinny?

You know why it's hard? Because it's hard to form new habits.

Sometimes to form new habits, we have to make ourselves do it.

Or we have to remember the consequences of not doing it. We have to realize that in order to form this habit, we're going to have to look at some of our other habits that are impacting it.

For example, take a look at my poor plant in the video above. It's a little wilted looking, isn't it? You know why? Because I didn't stick to my habit of watering it this morning. And that's exactly what prospecting is; it's watering your pipeline because the more people you're talking to, the less likely you are to get overly emotionally involved in deals that aren't really going to happen because if they don't happen, you're going to have to pick up the phone and call some other new people. Oh my gosh, there's rejection in that.

Then there's the question of, "Well, what happens when we spend all of these times, and how many attempts before I can give in trying to call them?"

First, if it's taking you 10 to 12 attempts to reach someone and you're not getting through, then maybe it's time to start considering a different message or maybe a different person to get into that account.

Second, if you're doing 60 or 70 activities a day to the 200 accounts that are named under your territory and you're not getting anywhere, and you've tested the messaging, you need to find some ways to get some new accounts into our name. You might have to come up with some creative ideas.

Third, to form a habit, again, look at the habits that you already have first and figure out how you need to change those.

For example, I know that I can't skip watering this plant in the morning because otherwise it's going to look like that and it's going to die, just like your pipelines.

Join us for a sales conversation!

All right, we talk about this and more on our monthly free live sales lab. Join us for next month's session in August! We're usually talking pipeline, people or prospects, but come ready to interact because this isn't theoretical, this is real world, like this poor dead plant.