To be a GOAT Requires Mental Toughness and Unselfishness

After the Patriots won the championship game that sent them to Super Bowl LI against the Atlanta Falcons, both Brady and Belichick were interviewed about the win and the team. What stood out to me was two corresponding comments from both of them:

Belichick: “It’s all about the players. We’ve got great players. They work hard, they’re unselfish, and they’re tough.”

Now, if you watched the Super Bowl last night, you probably saw a similar theme running through all the interviews after. And if ever there was an example of the impact that mental toughness can have on reaching a goal, look no further than the first ever Super Bowl champ to come back from a big deficit, win in overtime, and become one of the GOATs (Greatest of All Time, if you are not a football fan) in NFL history.

Who would have thought that a 6th round draft pick, #199 on the list would become that? All the stats were against him! He had no reason, no right to say to Robert Kraft after his selection- "Picking me was the best choice this organization has ever made." But he was right. Here's why. 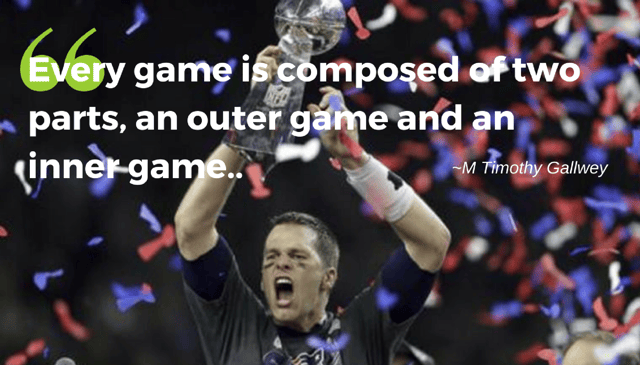 Have you ever wondered why some people don’t set bigger goals, reach higher? If it’s not someone else’s voice, sometimes it is our own voice. Maybe it’s not what someone else told you, maybe it is a belief you developed to protect yourself but now no longer serves you.

For example, I had a conversation with a past client who had a tough childhood. He was fed consistently the mantra that he wasn’t good enough, that he would end up no better than his parents. He was fearful of setting his sights too high- what if I fail? What if they’re right? What if I am nothing of consequence? What if I am destined to end up just like so and so? What if someone else is disappointed? He didn't make the commitment to his own success and constant improvement because he didn't believe he could. Instead of building up his mental toughness, he allowed his circumstance to tear him down.

Which voice is preventing you from reaching your goals? Your own or someone else's?

How do we start changing the beliefs that come from the voices we listen to? You know- the frightened voices in our hearts, the doubtful ones in our guts, the nagging ones in our heads? The voices that when left unchecked turn into the procrastination that becomes the excuse of why we didn’t succeed- we didn’t want to fail so we didn’t start. "This isn’t the right time, conditions are not good, other things are more important, I need to do this first…"

Check out these posts to help develop your mental toughness:

Unselfishness and Self Awareness

There's two parts to this. Brady talked about mental toughness, but Belichick the coach talked about unselfishness.

A few weeks ago, one my millennial-aged sons was telling me about how annoyed he was with all the talk about self awareness with others his age. In his words, “Everyone is all about being the best they can be and all it really is a mask for being selfish and being totally self-absorbed. They aren’t trying to be their best to help others, but to help themselves. It's a bunch of BS.”

What does unselfishness look like in sales? It’s the instinct to do something outside your job description to help a customer be successful. It's fighting your internal politics to do what is right for the customer and the customer's customer.

Self awareness is also knowing what the voices in our heads are saying and that the majority of it are lies. Lies others have told us about our worth (see above). Lies about what we are destined to become (like our parents, peers, generation, gender, etc…). Lies about what is reaching too far, too big a stretch, too impossible a reality.

All lies. The first step to changing a lie, is to call it out. In order to get to the point of self awareness to know what we are meant to do, what we are good at, what will help others- we first have to shut out the lies.

But as I said at my INBOUND16 talk, knowing that you need to be self aware isn’t going to make it happen. There are actions we can take to shut out the lying voices and start developing the ones that change the projection of our lives. There is tons of neurological and psychological research as to why it can work.

Knowing that won’t help you do the things you need to do to maintain a positive attitude and develop the disciplines that will put you on track to reach your highest goals and dreams. (BTW-another thing Brady said in his post game interviews when asked about Goodell. He gives no time for negativity, it doesn’t serve his purpose. Another clue to developing that mental toughness.)

Check out these posts for help developing awareness:

Want to start developing your mental toughness and awareness right away? Here's another thing to keep in mind- Brady is almost always training and practicing. You can be too. Check out the recordings of the live sales labs and see how a coach can help you prepare for your next big game.