What was your biggest mistake & what did you learn from it? 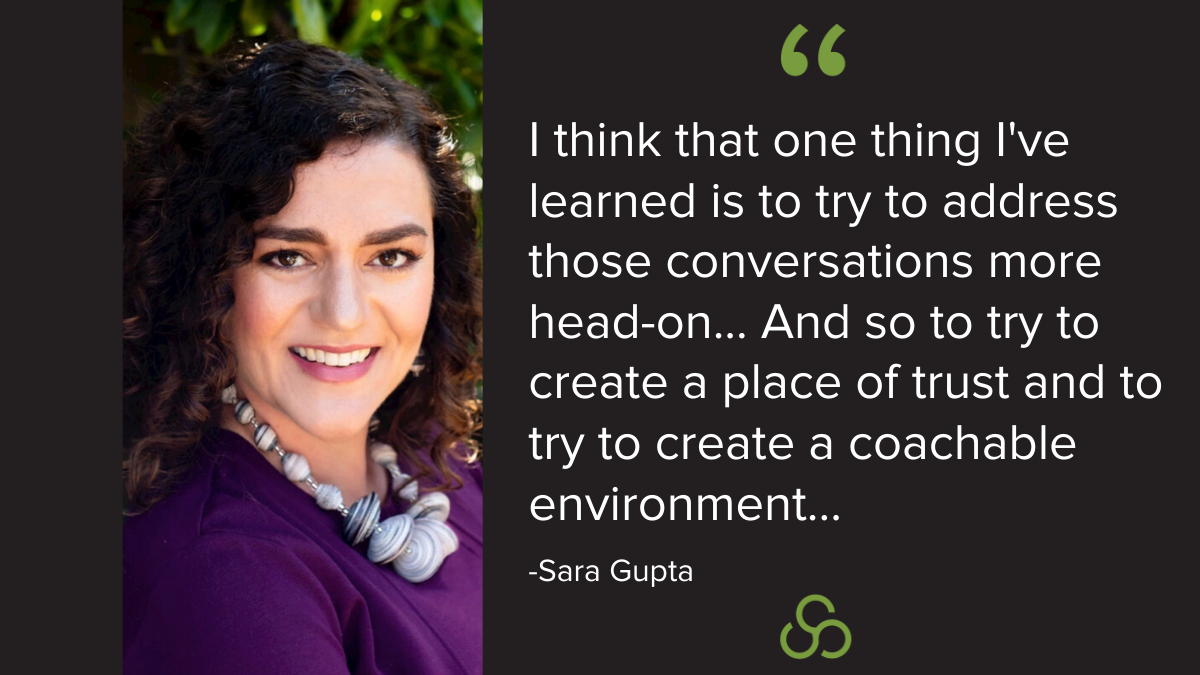 Of course we had to ask Sara Gupta, the VP of Sales at Amperity, what her biggest mistake was.

Check out this clip to see what she discusses about her mistakes as well as lessons that she wished she had known in order to prevent those mistakes from happening.

Carole Mahoney:
What was your biggest flub up?

Sara Gupta:
Hmm, gosh. It's so funny when you asked me this in preparation for this call and it's funny, I thought of so many. Whether it be something like, hey, I wish I had created a lot more operational clarity sooner. I wish I had coached that certain conversation differently. I wished I had isolated the bad apple on the team sooner and taken action or notice that someone else was struggling and supported them sooner...

I can think of a million examples, truly, and so it was really difficult to pick any one. But I think always when it comes down to it, the things that have been most impactful in terms of results have been people oriented things. Whether it be, like I said, not addressing a challenging individual sooner or making sure that somebody who's struggling is getting the right support soon enough and being coached. So I'd say that that's been the standout lesson over time is to really make sure that you're putting the people first and that the results will follow.

Carole Mahoney:
So let's focus on the person who is a challenge. Some people might call it, I've heard other VPs call it that toxic person, the negative person, the uncoachable person. When you look back at that, what is the thing that you wish you had known before? Like what was the thing you didn't know that you didn't know then that you know now? That you wish you knew then?

Sara Gupta:
I think that one thing I've learned is to try to address those conversations more head-on or those people more head-on sooner. And so to try to create a place of trust and to try to create a coachable environment and to try to help them better understand my motives. So that's something that I've definitely learned is to say, "Hey, here's what I'm observing. Here's what I'm here to do. Here's how I'm here to serve you, but you need to be an active participant in this" versus one, avoiding it, and letting the situation persist longer than it should. As well as not taking into account the impact that an individual can have on the rest of the team. And making sure that I am thinking holistically about the situation rather than getting emotionally attached to solving that one individual, whatever the solve may be.

Carole Mahoney:
Right. And inevitably after we make that mistake or whatever wrong decision or saying the wrong thing, there's that little niggle of doubt that enters our minds, that you don't really know what you're doing or how are you going to be able to do that if you can't do this? And I can't believe that you did that. There's all of these little guilts that enter our heads, and some maybe more than others. And I don't know to what extent that happened to you. But after you've made that mistake, how do you bat that down and continue to move forward? How do you continue to develop that growth mindset that we all need in sales?

Sara Gupta:
Yeah. And that's again why I love ... I think one of the things you and I originally connected on was our shared interest in cognitive behavioral theory, because I think it's ultimately rooted in self reflection and saying, okay, what am I going to learn from this experience and how am I going to apply that forward? And that is an iterative process. That is, you don't go from zero to 60. It's an evolved process over time. And once I started to settle into being more self-reflective and then trying to apply that forward, and that I think maps to this idea of letting go of my own personal need to be perfect. And when I allowed for my own imperfections, it allowed me to be more self-reflective, which then actually allowed for the growth mindset and say, okay, I see what I did here. I see how I could have handled this differently. And I'm going to try to one, say Hey, is there a way to apply this reflection to the situation right now? And two, how would I handle this differently going forward?

And also the ability to allow for my own personal imperfections also allows me the ability to say, Hey, I wish I handled that differently with my team and with my leadership, to be vulnerable and to model the behavior that I want to see in others. And to say, Hey, I let that go on too long, or I wish I would have had a different kind of conversation. So really just trying to be disciplined about being reflective, personally reflective in my own behavior and the role that I play in any scenario has been hugely impactful in how I show up today.

Carole Mahoney:
And it's such a cognitive behavioral thing, right? Because the more we try to hold onto that perception of perfection that we try to portray to other people the more that doubt builds inside of us until it comes spilling out in some way. And it's almost like embracing imperfection helps us to get over the need for approval of other people, which makes you stronger and more confident. It's an oxymoron, the less you try to be perfect, then people actually endear themselves to you more because we can see through the BS. I'm sorry. We can. And at some level, I think we all know that, but we still try to portray that I'm perfect. There's nothing wrong. I know what I'm doing. There's no mistakes that I'm making. That's just never the case.

Antsy to check out this full video?
Watch the session on-demand now! To learn more, don't forget to follow Sara on LinkedIn and subscribe to the Unbound Growth blog or Youtube channel!

Topics: salespeople, What Sales Can Learn From Series