What does it take to close more sales now?

It’s the end of the calendar year and the topic on everyone’s mind, in their inbox, and at the water cooler is- how do we close these last deals? What do we need to pull out of the hat to meet our goal in these last days? What can really be done to impact Q4 revenue that hasn’t already been tried? A new tech tool? Better use of the tools we have? A trick, tip, hack, or technique?

Over the past month we’ve been working with the salesperson, the manager, and the owner of a small technology services business. After we got started with them, we learned the details of how the owner hired the sales person, trained them, and expected to see results of at least 5 deals a month. But up until now, nothing had happened in 3 months.

The manager wants the sales person to follow a process, enter the activities in the CRM system so he can report up to the owner what is happening.  (This despite the fact that they haven’t quite figured out what the sales process is and how it aligns to their ideal client’s buying process... but they have a big fancy CRM system! Ok, that’s another problem for another post on another day, but it’s a story that anyone who has bought a CRM knows well…).

The salesperson wants to “be a good soldier and get it done”. After evaluating each member of the sales team based on their role, each was asked to read it themselves with specific instructions. The salesperson, let’s call him Mark, did so and when he came to his next scheduled call his first concern and most pressing questions were about his closing competencies. How is it that he has had any success in sales if he is such a terrible closer?

It’s no surprise- who doesn’t envy the art of the effective closer? There are so few of them. So when Mark asked, what do I need to do to be a more effective closer, he was surprised when we replied- stop closing. Stop looking at the close as something you do to someone. After we went through his evaluation and he started to understand how the sales fundamentals impacted his ability to close, he had this to say (listen to the audio recording of his ah-ha moment here.)

“You guys have changed my perspective on the close because I thought it was just you kinda ‘used car salesmen’ somebody when it comes time to make a decision, instead of making sure that you check off all the boxes of what the business person or consumer is going to need. And making sure that everything is understood and you move it along in a timely process- and that’s all part of the close instead of just trying to use the close at the end to make a decision.”

If you listen to the entire 1:18 of the audio, you will hear me tell Mark that it is very common to have people who aren’t strong at the closing because they are also not strong in the other areas of the sales process. The close is not the time to negotiate, nor should their be any surprises to anyone. Effective closers don’t necessarily have some special talent or skill, tricks or techniques- effective closers know how to have conversations and uncover problems and solutions throughout the process- from the moment that they say hello.

Having worked 1-1 with Mark over the past 30 days on his approach, messaging, timing… basically working through his 1-1 conversations with people, his manager and the company owner started to notice some changes. The manager commented that he is having 4x as many conversations from prospecting.

Then the owner sent us an email. “Mark is KILLING IT - the appointments are going great!!!” when I asked him what specifically was happening- he replied:

“The demos are ALL very receptive and well qualified. 5 XYZ companies and one ABC company. If we sign them all it's about 150K in yearly revenue.

Later Mark told us that 2 deals closed, 2 more are about to, and there are more in the pipeline. We’ve only been talking for 30 days. We haven’t shared any special sales secrets with Mark that hasn’t been shared with others. The difference is that Mark is changing his perspective, his mindset, his habits and with that- his approach and ability close.

Notice it has nothing to do with the CRM? Can tools and processes help you be organized and develop a daily action plan? Sure- but a fool with a tool is still a fool. To even get the process right, you need a strong enough salesperson who can ask the right questions to know what the buying process is that your sales process needs to align to. Fix the fools before you start using the tools, or someone is going to get hurt. 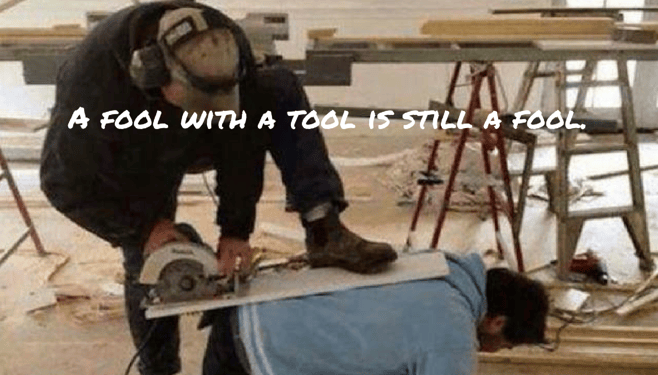 Changing your perspective can start with a single conversation.

If you want to get results like Mark in the next 30 days, check out the Sales Coaching Pilot Program.